Tango no Sekku and Mounted Archery 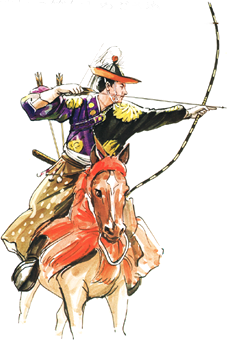 Tango no Sekku is said to be a custom that came from China 1,000 years ago. It appears to have originally been a ceremony to pray for health. Tan (端) means "beginning" and go (午) meant "Day of the Horse," and is a homonym for the Japanese word for "five," so the fifth day of the month was designated as Tango no hi ("the first horse day of the fifth month"), and the ceremony was performed not only in May, but in every odd-numbered month.
In The Pillow Book, Sei Shonagon wrote, "There is no day like the fifth of May for seasonal festivals. The appearance that the iris and wormwood are both fragrant is very quaint." In the Tempyo Era of the ancient Nara Period as well, the Sechie (literally, "fifth day seasonal banquet") was held in the Imperial Palace. Tango no Sekku eventually became Boys' Day from around the time when umayumi and yabusame (mounted archery events) began to be held after the banquet as a regular tradition in the Imperial Palace.

From Outside to Inside the Home in the Edo Period

The irises used as decorations for Tango no Sekku symbolized the warrior spirit. Accordingly, the tradition developed further during the Kamakura Period, and from the time of the Tokugawa Shogunate, a solemn ceremony was held as one of the Gosekku, or "five seasonal festivals" (the Seven Grasses Festival on January 7, the Peach Festival on March 3, the Iris Festival on May 5, the Star Festival on July 7, and the Chrysanthemum Festival on September 9). Flags, banners, identification banners, streamers, and other outdoor decorations were used to celebrate the occasion in samurai homes. However, townspeople were prohibited from flying flags, so instead they raised banners decorated with pictures of shoki demon slayers and warriors, and instead of streamers, they devised a koi fish-shaped windsock, providing lively enjoyment for adults and children alike. Eventually, the decorations expanded into the interior of homes as well, and things such as warrior dolls and indoor banners became established as decorative traditions.
As time went on, this traditional event was passed down lavishly as a festival for the healthy growth of boys in every era. In July 1948, the name was changed to "Children's Day," and it became a national holiday celebrated on May 5, subsequently becoming even more lavish. 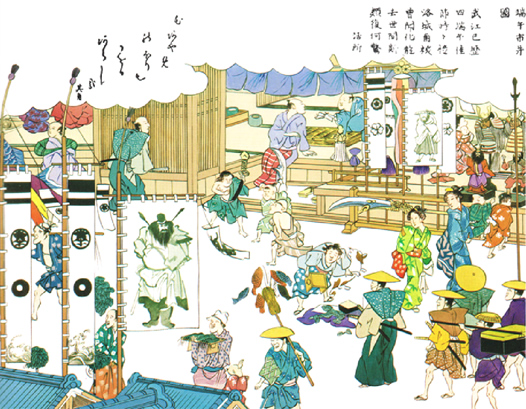 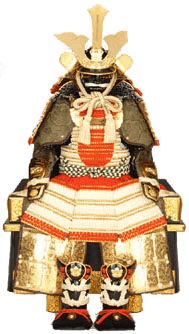 In Japan, armor was continually being improved due to the changes in weaponry and the form of war, but it has also maintained its characteristics to a certain degree. However, with the advent of the Meiji Restoration and the resulting elimination of the warrior class and modernization, armor gradually fell out of practical use.
Today, armor is produced as historical art pieces, traditional craftwork, and historical materials.
Even compared to the protective wear of the rest of the world, the armor of Japan is characterized by its rich color and beauty. This is because the samurai were always at the core of power, and because a portion of the higher-class samurai symbolically cherished the armor in the peaceful Edo Period in particular. We produce our products utilizing the forged iron, leather, lacquer ware, metalwork, and plaited cord technology of that era, and other techniques from a variety of fields.

Details on the O-yoroiFrom the Heian Period

Along with the rise of the warrior class, the opening of the Heian Period was the stage for Japan's unique development of both the practicality and design of the fine primary armor worn by the samurai, embodied in O-yoroi armor. Because the main form of battle was mounted archery, a variety of innovations were made to provide stability while in the saddle and at the same time allow the warrior to move freely on horseback. These included such things as a heavy plate skirt, a large visor hanging down to cover the face, and other measures to accommodate archery. Subsequently, as the form of battle changed, warriors switched from the heavy O-yoroi armor to the light domaru armor, and further improvements were made. 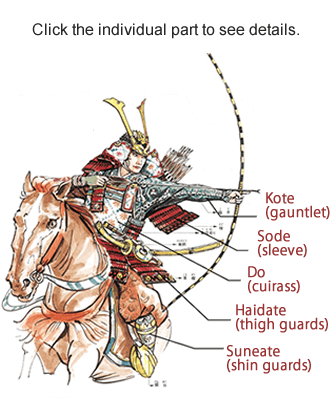 Details on the O-yoroi Descriptions of Parts 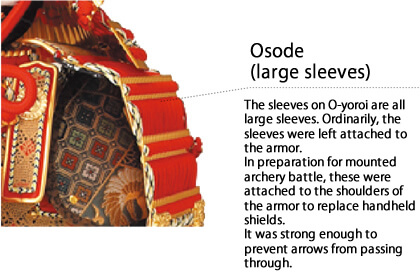 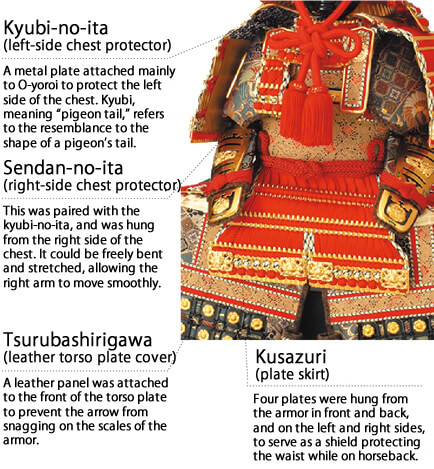 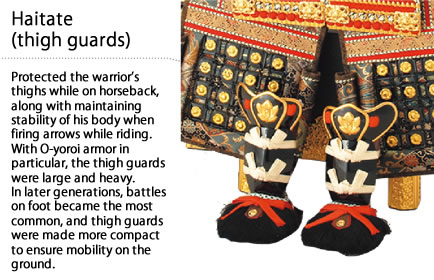 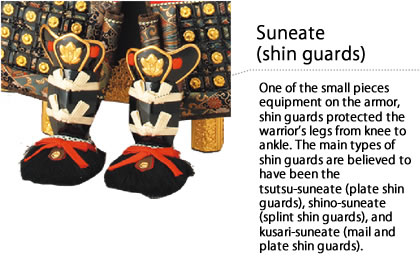 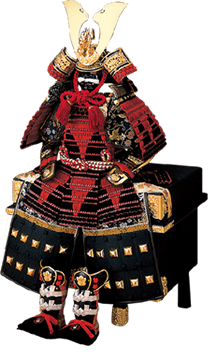 Unlike the large O-yoroi that was designed for warriors on horseback, this more compact armor was for warriors on the march, utilizing segmented tassets to allow them to be light on their feet. There were two styles. One style was hung from the chest to the abdomen, covering only the front. The other style extended it to the back and gathered it together in the center of the back. Suji kabuto helmets were used as necessary. As Japan entered the 14th century, the form of battle changed to mountain warfare, which was difficult for mounted warriors, and weaponry transitioned to forged items, such as swords and polearms. Accordingly, warlords also switched from the heavy O-yoroi armor to the light domaru armor, and further improvements were made. 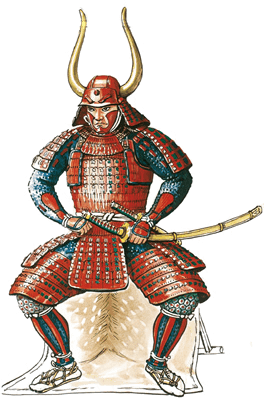 In 1543, Portuguese ships brought firearms to the island of Tanegashima, forever changing the form of battle. Along with providing the most complete protection possible, it was necessary to allow warriors to be light and agile. This led to the development of a new type of armor called Tosei-gusoku. Strong materials were considered for armor, and helmet facepieces that could deflect bullets, etc., were also produced. Since the time of the Battle of Sekigahara, armor has typically been used only for occasional military reviews. However, the magnificence and elegance of Japanese armor, created by the people of those earlier times who pursued both functionality and beauty, cannot be found in the armor of any other country.

From the early hoshi kabuto (riveted helmet) to the later suji kabuto (plated helmet), the helmets consisted of a hachi (bowl) and a shikoro (neck guard). The shikoro was a plate of layered scales that was hung from the back of the helmet's bowl to protect the back of the neck. The neck guard of the hoshi kabuto was lightly folded back on the left and right sides, with patterned leather on the front. A lame was used to protect the face when firing from horseback. With the suji kabuto, an umbrella-rim neck guard with a broadly opened hem was mainly used, helping to prevent the warrior's arms from being hindered while in close sword battle. 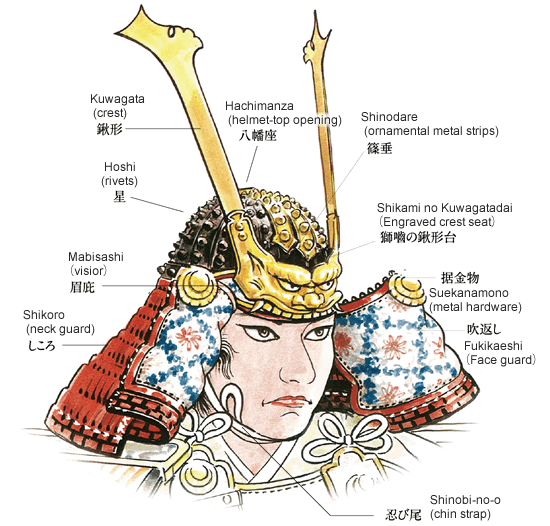 Helmets Evolving with the Times

The signs and decorations attached to a helmet are called tatemono. They are most commonly attached to the front of the helmet, in which case they are called maedate. One example of this is a kuwagata crest. Kuwa means "hoe," but it is said that it originated as a deformation of deer antlers.

Hoshi Kabuto of the Heian Period

The heads of the rivets securing the trapezoid plates are shaped like a chinquapin tree and look powerful, characteristics that are said to have given rise to the name hoshi kabuto (star helmet). 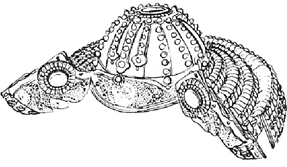 Hoshi Kabuto of the Kamakura Period

With the kuwagata crest attached to the front, many of these helmets were created as a symbol of the warlord, displaying his dignity and bravery. 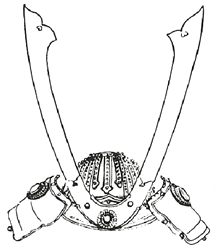 Hoshi Kabuto of the Muromachi Period

The plates that are joined together to form the bowl are secured flat. This helmet was worn in place of heavy hoshi kabuto, which also took time to build.

Helmets of the Late Muromachi Period

Beginning in the Northern and Southern Dynasties Period, instability of the social order led to lower classes rebelling against the upper classes, and the kuwagata crest gradually became commonplace. A variety of tatemono were used. 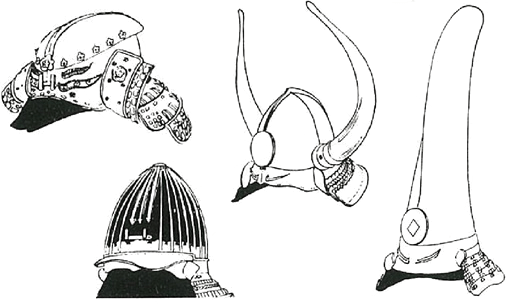